Methods: A prospective study involving pregnant woman who underwent CS from January to June 2013 at a tertiary referral center in the Czech Republic. The procedures were done in accordance with the criteria of the Center for Disease Control and Prevention with a follow-up period of 30 days.

Conclusion: In this study timing of administration of prophylactic antibiotics after cord clamping was safe for the baby and efficient for the mother with a low rates of postcesarean infections.

Cesarean section (CS) is one of the most commonly

performed surgical procedures in hospitals and its incidence is rapidly increasing in the world (1). An infection after CS is the most frequent postcesarean complication and is associated with significant maternal morbidity and mortality, and increased health care costs (2,3). The incidence rate of infections after CS reported in literature ranges widely from 0% to 23.5% depending on monitoring methods and prevalence of risk factors (2,4-9).

The routine use of prophylactic antibiotics in women undergoing CS reduces the incidence of infections after CS by 60% to 70% (10). Both ampicillin and first generation cephalosporins appeared to have sufficient efficacy in reducing infections after CS (11). Usually a single dose intravenously is administered at the time of the procedure or multiple doses intravenously is administered over a short period of time. For CS, prophylactic antibiotics are administered either before or after the cord is clamped. Unfortunately, obstetricians prefer the administration before the cord is clamped. Because there is some data that antibiotics reaching the baby during SC, can affect the pattern of bacterial flora in the infant gut, with the potential to affect the baby’s developing immune system (12,13), it is important to assess the whether antibiotic prophylaxis should be given before or after the cord is clamped.
Because of the potential for adverse outcomes for the baby and the effect on maternal infectious complications, we performed this study to assess the effects of giving the antibiotics after the cord is clamped. In our prospectively designed study, we investigated postcesarean infections according to the CDC criterion, with complete follow-up data on both the infections diagnosed in hospital and postdischarge infections.

In a prospective observational study at the Department of Gynecology and Obstetrics, University Hospital in Hradec Králové, Czech Republic, data were analyzed for all women undegoing SC between January 1, 2013 and June 30, 2013.
The University Hospital in Hradec Králové is a tertiary referral center for high-risk maternal and fetal medicine and performs approximately 2,500 deliveries a year.
Ethics committee approval was not required because the survey was a descriptive study and therefore did not influence either the diagnostic or therapeutic processes. Informed consent was also not required.

All patients who underwent CS during the study period were included. Women who had an active infection within 1 week of admission or during CS were excluded. 99.5% of patients were caucasian. All care was provided free of charge. A CS was defined as elective if the procedure was performed at least 24 h after the decision was made to operate and the woman had intact membranes. A CS performed within 30 minutes of the decision was classified as an urgent operation, whereas all other instances of CS were defined as emergency procedures. All surgical interventions were performed jointly by an attending consultant and a resident. Our standard operative procedure, after abdomen disinfection with povidone– iodine 10% prior to incision, is the Joel Cohen incision followed by a transverse incision on the lower uterine segment. The abdomen is closed with a continuous single layer suture of the uterotomy and the fascia along with intradermal suturing of the skin. All sutures are resorbable. The prophylactic antibiotic cefuroxim (1.5 g) was given to all women undergoing CS as a single intravenous dose following umbilical cord clamping. Women presumed to be allergic to cefuroxim were instead given 900 mg of clindamycin as a single intravenous dose after umbilical cord clamping.

Data on demographic characteristics, medical and obstetric history, course of labor, indications for SC, and surgical data were prospectively collected on each patient using a standardized questionnaire. The information was then entered into an electronic database (Tab. 1). In-hospital infectious complications were diagnosed by a physician and recorded on the standardized questionnaire. All women were contacted by telephone 40-50 days after CS and were asked about the development of any signs and symptoms of infection. There were up to five attempts to contact each patient before designating them lost to follow-up. In cases of readmission, monitoring was expanded using hospital databases. The treatment and outcomes of infections for both in-hospital and post-discharge patients were recorded.

The data were analyzed via NCSS version 8 (NCSS Statistical Software, Kaysville, Utah, USA). Baseline characteristics were described using absolute numbers, percentages, and relative frequencies. A univariate analysis was used to compare categorical data of included and lost patients. Univariate associations among categorical variables of both included and lost patients with a P value of 0.15 or smaller were explored using the χ2 or Fisher exact test. Multivariable logistic regression was used to identify risk factors associated with the infection for variables that were significant in a univariate analysis. Results are reported with a 95% confidence interval (CI).

A total of 1,125 deliveries were performed during the study period, 768 by the vaginal route and 357 (31.7%) by CS (Fig. 1). 13 women were excluded from the analysis because of an active infection within one week of admission or during CS.
Of these women, eight intraamniotic inflammations, two respiratory tract infections, one gastrointestinal tract infection, and two infections of unknown origin were diagnosed. From the remaining 344 CSs, 299 were followed up for 30 days and 45 excluded as a result of being designated lost to follow-up. 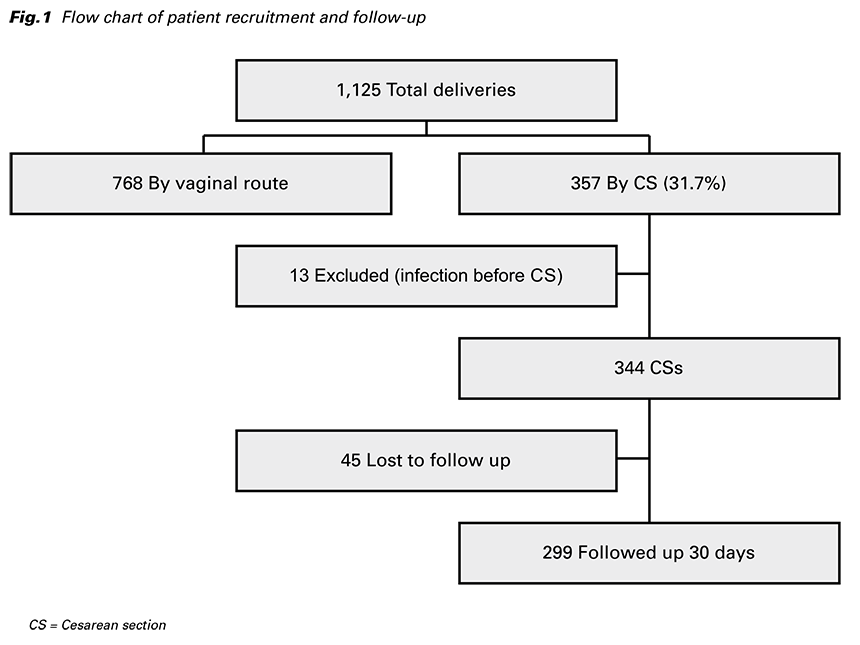 Table 1 lists demographic data and clinical characteristics of followed and lost patients. A univariate analysis was used to compare data in both groups
(Tab. 1). 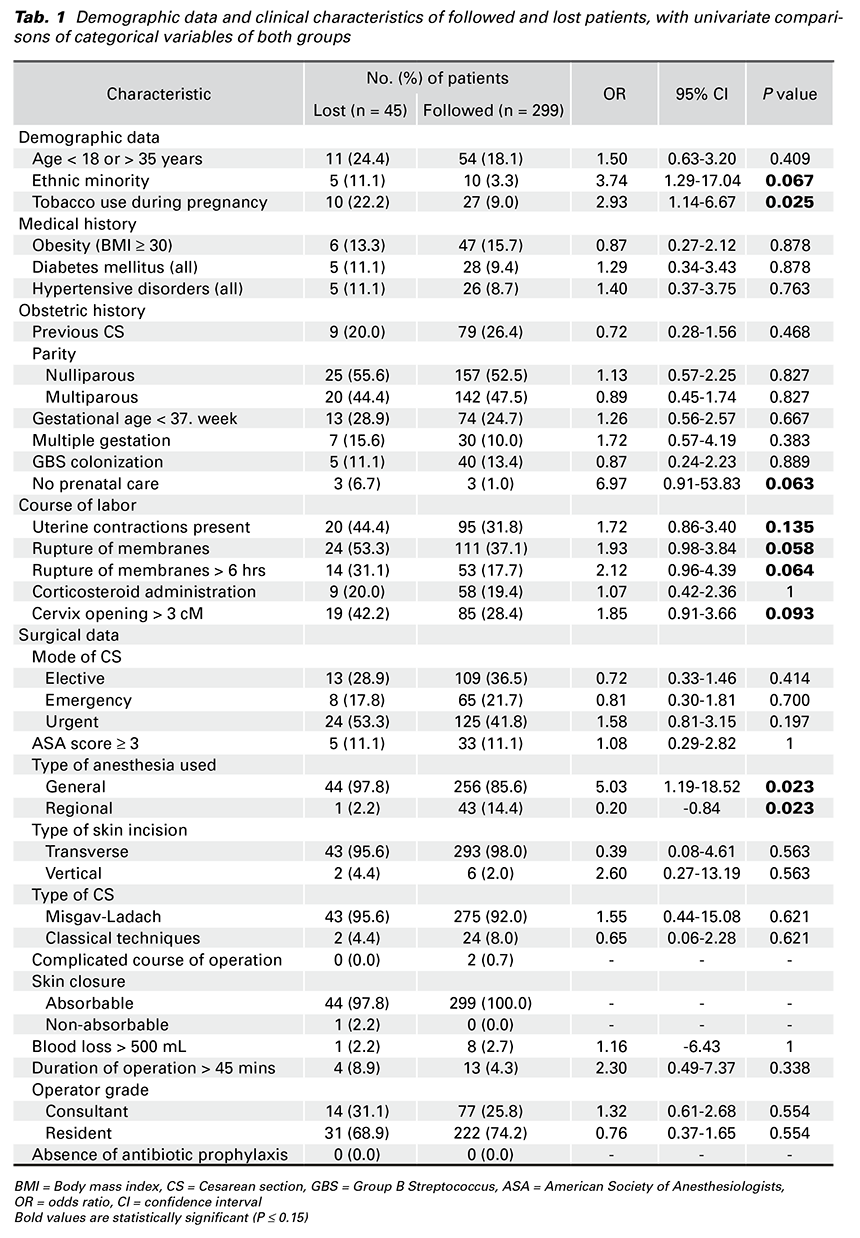 Of the 299 patients who were followed up 30 days, ten were diagnosed with a postoperative infection, giving an incidence rate of 3.3%. Out of all infections, nine were SSIs and one was non-SSI (Fig. 2). These SSIs included four superficial, no deep, and five organ/ space SSIs. The organ/space SSIs were all cases of endometritis and simultaneously one peritonitis. One non-SSI was a urinary tract infection. All infections occurred between the 2nd and 30th day postoperatively, with a median time of occurrence of 14 days. 8 cases (80%) were diagnosed after hospital discharge.

Univariate analysis and multivariate logistic regression analysis were conducted for variables expected to be related to postoperative infection. Obesity was the only independent risk factor for postoperative infection identified in this study. From seven significant different variables among both the followed and lost patients, none were determined to be independent risk factors.

The overall postcesarean infection rate of 3.3% in our center is lower than rates from other studies. Despite the fact that prophylactic antibiotics were administered after umbilical cord clamping, our incidence was very low. A study from England identified high rates of postcesarean infections (9.6%) but only SSI, and follow-up data were available on only a third of the women at 30 postoperative days (4). In a Danish study, 458 of 2,492 patients developed postcesarean infections such as SSI and non-SSI, yielding a rate of 18.4%, with postdischarge monitoring of 30 days (15).

A majority of postoperative infections are detected after patients are discharged from hospital (15-19). During postdischarge monitoring in our study, 80% of infections were detected. The data suggest the necessity to perform postdischarge monitoring to obtain more accurate infection rates. It is recommended that when the rate is being calculated, it is advisable to use the number of followed patients rather than the number of the total sample. The patients in our study were contacted by telephone, a feasible and effective method. Weinberg et al demonstrate reducing infections among women undergoing CS in Colombia by means of continuous quality improvement methods in two hospitals from 10.5% to 0% and from 6.1% to 4.4% but postdischarge surveillance was not performed (5).
Despite studies have not shown an increase in maternal infectious outcomes when the antibiotic prophylaxis was administered after clamping of the cord (8,20-22), several meta-analyses have presented that there was significant evidence that antibiotics given before cord clamping improves maternal infectious complications compared with administration after the cord was clamped (23,24). However, it has been proven that antibiotics given before cord clamping can affect the infant’s gut bacterial flora, with the potential to impact mucosal and systemic immune function (12,13,25). Additionally, prophylactic antibiotics may lead to increased drug resistant organisms which may cause serious hospital-acquired drug resistant infections (26).
There is missing data on the adverse effects of antibiotics on the baby, making the assessment of overall benefits and harms difficult. No studies have systematically collected the reported adverse infant outcomes nor the effect of antibiotics on the developing infant immune system. Prophylactic antibiotics given to women undergoing CS are beneficial for the mother but there is uncertainty about the consequences for the baby (10,23,25). It has been suggested that institutions with a low levels of baseline postcesarean infections may see no impact of antibiotics on the baby and currently good effects of antibiotics on maternal infectious complications when the antibiotic prophylaxis was administered after clamping of the cord (8,22). In this study, we assess whether antibiotics given after cord clamping are effective in preventing infection in women having CS. The results seen are clinically important when the postcesarean infection rate of 3.3% was sufficiently low and the timing of administering antibiotics was safe to the baby.
The limitation of this study includes the potential for overestimating the postoperative infection rate. The patient population in our study was not representative of the typical obstetrics population in our tertiary referral center. There was a higher percentage of women with pregnancy pathology and a higher prevalence of women who were obese. The major strengths of this study were the prospective approach and method of monitoring according to CDC criteria with including complete follow-up 30 days after CS. The unique merits of our study were the exclusion of women with an active infection before or during CS (for fear of overestimating the postoperative infection incidence) and the exclusion of patients lost to follow-up (for fear of underestimating the postoperative infection rate).

Conclusion. Prophylactic antibiotics after umbilical cord clamping were sufficient in our center. We believe the very low postcesarean infection incidence in the present study to be the true incidence, and comes as a result of following the CDC criteria and 30 day monitoring period. This study supports the suggestion that prophylactic antibiotics given after cord clamping can be efficient for the mother and safe for the baby on obstetric units with a low rates of postcesarean infections.