Treatment of local recurrence after resection of endometrial cancer is complicated. MRI-guided intensity modulated radiation therapy (IMRT) can deliver high doses of radiation to tumors while sparing the surrounding normal tissues. Here, we report a case of 64-year-old woman with local recurrence and small lung metastases after resection of early endometrial cancer. Since the patient refused chemotherapy, high-dose MRI-guided IMRT (66 Gy in 33 fractions with a maximum of 82 Gy) was performed to alleviate dysuria and hematuria. Her post-treatment course was uneventful and her symptoms resolved after 1 month of treatment. MRI demonstrated that the locally recurrent tumor disappeared completely 6 months after IMRT, and the condition persisted 1 year later. In conclusions, this is the first report of MRI-guided IMRT for locally recurrent endometrial cancer after resection. High-dose MRI-guided IMRT leads to relief of symptoms by controlling local recurrence, and the treatment-related toxicity was minimal.

Patients with local recurrence after resection of endometrial cancer are treated with a combination of chemotherapy and radiotherapy. Radiotherapy is usually given in a combination of intracavitary brachytherapy (IB) and external beam radiation therapy (EBRT) (1-3). Since IB can accurately deliver high doses of radiation, it is a useful treatment when recurrent lesion is confined to the postoperative margin. While IB can deliver high doses of radiation precisely to even moving targets, it is difficult to plan an intensity modulated radiation therapy (IMRT) treatment because the dose decreases rapidly away from the IB source.
MRI-guided radiotherapy has the functions of both MRI and radiotherapy and can deliver radiation while monitoring a moving target and surrounding normal tissue. Because MRI has better soft tissue contrast than CT, radiotherapy for recurrent tumors of the pelvis may be better with MRI-guided radiotherapy than with CT-guided radiotherapy (4). Here, we report a case of local recurrence with urethral invasion and small lung metastasis after resection of endometrial carcinoma successfully treated with MRI-guided IMRT. To our knowledge, this is the first report of MRI-guided radiotherapy for recurrent endometrial cancer after curative resection.

A 64-year-old postmenopausal woman with a history of stage IB endometrial adenocarcinoma was referred to our institution because of dysuria, and urethral and vaginal bleeding that lasted for a month. The patient had previously undergone total abdominal hysterectomy, bilateral salpingooophorectomy, and pelvic and para-aortic lymph node dissection, followed by 4-course chemotherapy consisting of docetaxel and cisplatin 4 years previously. Postoperative pelvic radiation therapy was not performed because the patient’s consent was not obtained. Histopathological findings were FIGO grade 3 endometrioid adenocarcinoma with lymphovascular space invasion and her surgical margins were negative for cancer cells. The cancer cells were negative for estrogen receptor/ progesterone receptor. Her follow up course was uneventful until this referral. Before referral to our institution, she suffered from urinary retention, and a balloon catheter was placed inside the bladder. On CT, several small lung metastases with a diameter of 1 cm or less were observed (Fig. 1a), but there were no symptoms associated with lung metastasis. At least 7 lung metastases were found on CT. Three of them had tumor diameters of 5 mm or less and were not considered to be indicated for local treatment. Abdominal CT revealed an expansile tumor that grew from the right side of the vaginal stump, and surrounded the urethra circumferentially, and the urethral stenosis was observed. MRI showed inhomogeneous hyperintensity with a hypointense peripheral rim on T2-weighted image (Fig. 1b), and hyperintense signal on diffusion-weighted image (DWI) (b = 800 s/mm^2) and hypointense signal on apparent diffusion coefficient (ADC) map (Fig. 1c). T1-weighted post-gadolinium MRI showed heterogeneous enhancement (Fig. 1d). MRI showed tumor invasion to the entire urethra, periurethral soft tissues and the anterior wall of the rectum. No vaginal invasion was detected. Serum CA 125 value was slightly elevated (36 U/ml, normal Since no metastatic lesions other than lung metastases were observed and performance status was good (ECOG Performance Status 0), we thought that long-term improvement of symptoms can be obtained by controlling local recurrence. We considered that it was difficult to administer high dose radiation to the recurrent lesion by conventional radiotherapy, because the colon was in the radiation field. IB was also impossible because the entire tumor could not be treated by IB alone. Although the advantages of EBRT and IB were retained, MRIguided radiation therapy was considered to be the treatment that compensates for the drawbacks of both. Instead of a formal ethics committee, the principles of the Helsinki Declaration were followed, and written informed consent was obtained from the patient before treatment. MRI-guided radiotherapy was performed to the local recurrent lesion using a split-magnet 0.35 T MRI-guided radiation therapy system (MRIdian, ViewRay, Oakwood Village, OH, USA).
The patient underwent both CT and MRI simulation using a 64-row multidetector CT scanner (Discovery CT750 HD, GE, Chicago, IL, USA) and a 3T MRI unit (MAGNETOM Skyra, Siemens Healthcare, Erlangen, Germany), respectively. CT simulation was performed using non-contrast axial CT images reconstructed to 2.5 mm slice thickness. MRI simulation was performed using axial two-dimensional turbo spin-echo T2- weighted images and gadolinium-enhanced volumeinterpolated breath-hold examination images, both of which were reconstructed to 2.5 mm slice thickness. The patient also underwent MRI simulation on 0.35T MRI-guided radiotherapy system (MRIdian® System, ViewRayTM Inc, Oakwood Village, Ohio, USA) with surface coils on the pelvis using true fast imaging with steady-state free precession (true FISP) images. 0.35T MRI was taken at the same position as when CT and 3T MRI were taken. Fusion images of CT, 3T and 0.35T MRI were generated using Monaco 5.0 treatment planning software (Elekta AB, Stockholm, Sweden) to determine gross tumor volume (GTV). GTV was defined after one radiologist and one radiation oncologist discussed and agreed. Planning target volume (PTV) was defined as 1 mm margin expansion from GTV. The prescribed dose to the D95% of the PTV (the dose covering 95% of the PTV) was 66 Gy in 33 fractions with a maximum of 82 Gy (Fig. 2a-d). Treatment plan was carried out using IMRT, the maximum dose within PTV was not constrained. Since the tumor shrank during the treatment, offline adaptive radiation therapy was performed at 46 Gy and 60 Gy irradiation. 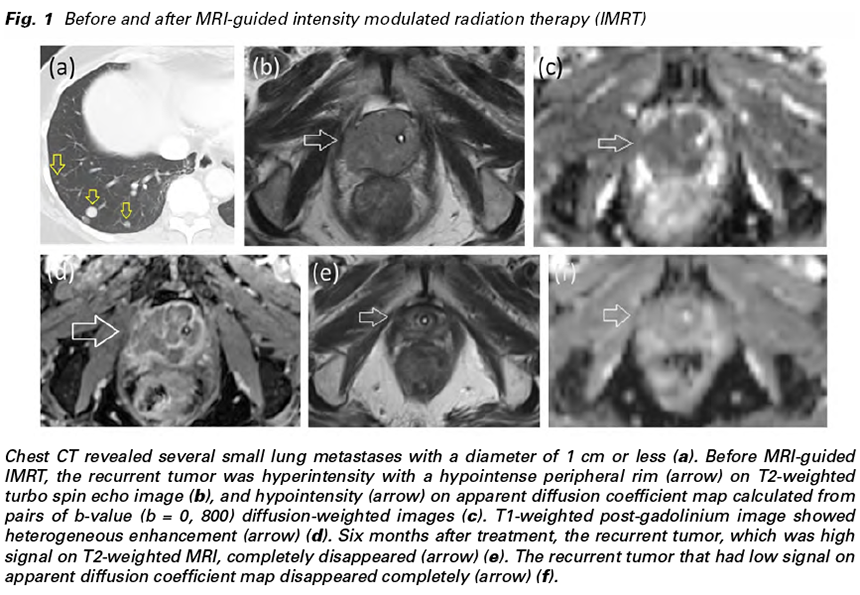 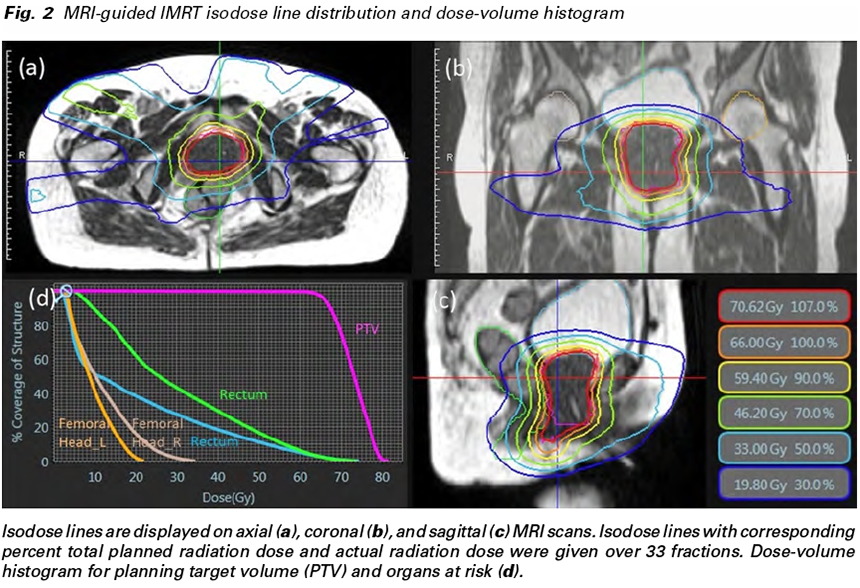 The patient was treated with real-time MRI guided tri-cobalt-60 delivery system via rigid image registration-based beam control in the sagittal plane at four frames per second. At each treatment session, true FISP MRI in the treatment position was taken with breath holding and the image was registered by the attending radiation oncologist and/or radiation technologists. The patient experienced grade 1 dysuria throughout the treatment. Her dysuria, and urethral and vaginal bleeding resolved after 1 month of treatment. On follow-up MRI, the tumor shrank significantly after 3 months of treatment and disappeared completely after 6 months (Fig. 1e & 1f). After 1 year of follow-up, lung metastases were exacerbated, but the locally recurrent lesion treated with MRI-guided IMRT was controlled without sequelae.

We initially planned to treat this patient with chemotherapy, but the patient refused because of the low efficacy of chemotherapy and concerns about side effects (5). For patients with pelvic recurrence and/or distant metastases, radiotherapy can be an effective palliative therapy if radiotherapy has not been used previously. There is no consensus on the method of radiotherapy, and the optimal dose and number of fractionations are unknown (6,7). Some endometrial cancer patients with distant metastases may survive for a long period of time if the tumor burden is not significant, if there are no serious complications, and if performance status is good (6-9). Since this patient had no serious complications and the burden of the tumor due to lung metastasis was minimal, it is expected that long-term improvement of the symptoms can be expected by controlling the urethral tumor. In order to control the locally recurrent tumor, it is necessary to accurately irradiate large doses of radiation and avoid exposure to normal tissues as much as possible.
With MRI-guided radiotherapy, IMRT can also be performed while monitoring both tumor and normal tissue, allowing high-dose radiation to be accurately delivered non-invasively. Since pelvic tumors can be evaluated in more detail using MRI, MRI-based imageguided radiation therapy (IGRT) may be more useful than CT-based IGRT. This patient had a catheter in the bladder at the time of referral because of urinary retention. Since it was thought that the quality of life would be significantly improved if the catheter became unnecessary, we attempted local control of recurrent tumor by administering high dose of radiation. The optimal total radiation dose and the fractionation of MRI-guided IMRT are unknown, however, since the radiation dose is 2 Gy/fractionation or less for surrounding normal tissues, this dose and fractionation protocol is safe and acceptable. We think that dose escalation, hypofractionated IMRT, and stereotactic ablative radiotherapy (SABR) will be the next challenge.
The limitation of this study is that it is a single case report. Whether MRI-guided IMRT is useful for postoperative local recurrence of endometrial cancer has not been verified yet. However, if the recurrent tumor is controlled by MRI-guided IMRT alone without using IB, MRI-guided IMRT may become a less invasive and more convenient treatment method. Secondary, the patient had multiple small lung metastasis. High-dose radiation therapy is generally used for cure not for palliation. However, we considered that local control could improve quality of life for the rest of her life if the patient survived for a long time. High-dose radiotherapy for the purpose of local control may be considered as an option for patients who are expected to survive for a long time despite distant metastases.
In conclusions, a single case study cannot be generalized to others without further scientific verification, however, high-dose MRI-guided IMRT leads to relief of symptoms by controlling local recurrent tumor, and the treatment-related toxicity was minimal.

Conflict of interest: The authors declare that they have no conflict of interest.
Research involving human participants and/or animals: This article does not contain any studies with human participants or animal performed by any of the authors.
Informed consent: This patient provided written informed consent for publication of this case report. Ethical approval: All procedures performed in studies involving human participants were in accordance with the ethical standards of the institutional and/ or national research committee and with the 1964 Helsinki declaration and its later amendments or comparable ethical standards.