Threatened abortions are indicated by vaginal bleeding that occurs before the 20th gestational week without cervical dilatation and without disruption of fetal or embryonic integrity (1). Vaginal bleeding occurs in 25% of all pregnancies and pregnancy loss occurs in approximately 50% of these (2).
The etiology of threatened abortion is not known exactly. There are hypotheses that suggest that the bleeding that occurs in threatened abortion triggers a variety of mechanisms. One of these hypotheses is that uterotonic mediators, which occur with bleeding, disrupt the contractile-relaxing balance in the uterus (3). Another hypothesis is that this bleeding causes the development of a chronic inflammatory reaction in the decidua. In fact, it is thought that this chronic inflammation suggested in this hypothesis causes placental developmental disorder and causes obstetric complications (premature-preterm rupture of membranes, preterm labor, preeclampsia) in the later stages of pregnancy (4).
Procalcitonin consists of 116 amino acids and is the precursor of calcitonin. It is present at immeasurably low levels in healthy people (5). Procalcitonin, which is defined as a marker of bacterial infection, draws attention with significant elevation, albeit at low levels, in some diseases (end-stage renal disease, congestive heart failure, cirrhosis, acute kidney injuries, intracerebral hemorrhages, post-operative anastomotic leaks) in which inflammatory reactions play a role, as shown in recent studies (6-8).
The precursor cells of the immune system are neutrophils. However, studies have shown that platelets also have a critical role in the immune response (9). Like neutrophils, platelets increase cytokine production at the onset of inflammation. These cytokines also stimulate new neutrophil and platelet synthesis, leading to increased inflammation (10). In many clinical studies, it has been shown that Neutrophil Lymphocyte Ratio (NLR) and Platelet Lymphocyte Ratio (PLR) are associated with many diseases in which there is no infection but where inflammation plays a role in the pathophysiology (11).
In this study, we wanted to evaluate the relationship between threatened abortion, which is thought to play a role in the pathophysiology of chronic inflammation, and the inflammatory markers procalcitonin, NLR and PLR. Since there are not many studies on this subject, we think that our study will contribute to the literature.

Ethics committee approval for the study was obtained from the ethics committee of Amasya University (protocol #34). The study and control groups were selected from pregnant women who applied to the Amasya Sabunçuoğlu Şerefeddin Training and Research Hospital Gynecology and Obstetrics clinic between 15 June 2020 and 30 November 2020. The study was designed as a prospective case-control study. In this period, 55 patients diagnosed with threatened abortion formed the study group, while 55 healthy pregnancies formed the control group. The pregnant women in the control group have consisted of those who completed their 20th week without any complaints in the follow-up. These two groups were compared in terms of demographic characteristics (age, height, weight, body mass index, educational status, parity, previous surgery), serum procalcitonin, neutrophils, lymphocytes, platelets, NLR and PLR.
Pregnant women with vaginal bleeding, no cervical dilation, and fetal heartbeat on ultrasonography between 6-20 weeks were included in the threatened abortion group. The first healthy 55 pregnant women who came to the outpatient clinic for normal control, between the 6th and 20th weeks, formed the control group. Those with hypertension, diabetes, thrombophilia, those diagnosed with hyperemesis gravidarum, those with a history of threatened abortion, preeclampsia, gestational diabetes, hellp syndrome in previous pregnancy, those with autoimmune, renal, cardiac or hepatic disease, those with diseases that may trigger inflammation (such as infectious diseases, collagen tissue disease) and those with fetal anomalies were not included in the study and control groups. Even if bleeding of patients in the study group recurred, each patient was included in the study once. The patients in the threatened abortion group who had spontaneous abortion were excluded from the study group. Patients who met the study criteria were included in the study after they were informed about the study and their consent was obtained.
Obstetric evaluation of patients was performed by a single clinician (S.M.A.) using a Mindray DC-7 ultrasound device. Week of gestation, amniotic fluid measurement, heartbeat and the presence of any hemorrhage area were evaluated for all patients.
Age, last menstrual period, parity, height, weight, education level and previous operations of all pregnant women were noted. Blood was drawn into a hemogram tube for serum neutrophil, lymphocyte and platelet levels, NLR and PLR, and into a biochemistry tube to evaluate parameters such as serum procalcitonin level, blood glucose, and renal and liver functions.
Neutrophil, lymphocyte and thrombocyte levels were evaluated with laser optics (X N-1000, Sysmex, Japan), and procalcitonin with electrochemiluminescence immunoassay (Cobas e 411, Roche, Japan).
Serum neutrophil, lymphocyte, platelet, NLR, PLR and procalcitonin levels of both groups were compared. ROC analysis was performed in terms of NLR, PLR and procalcitonin for threatened abortions.
The threatened abortion group was divided in two according to the presence of hemorrhage area in ultrasonography and these two groups were also compared in terms of NLR, PLR and procalcitonin.
Power Analysis of the Study: G*Power 3.1 program was used to determine the sample of the study. The sample of our study was calculated considering that Paccolat et al. (12) evaluated procalcitonin levels during pregnancy, childbirth and postpartum period. Accordingly, the effect width was determined as d = 0.7 and according to the double-tailed hypothesis method, the confidence interval was 95% and the margin of error was 5%. As a result of the calculation, it was determined that there should be a total of 110 women, 55 for the control group and 55 for the experimental group.
Statistical analysis: Data were analyzed with IBM SPSS V23. Compliance with normal distribution was evaluated by Levene’s test. Chi-square test and Fisher’s Exact test were used to compare categorical variables in the groups. Mann-Whitney U test was used to compare non-normally distributed data in paired groups and independent two-sample t-test was used to compare normally distributed data. ROC analysis was used to determine the cut-off values for procalcitonin, NLR and PLR for threatened abortions. P < 0.05 was considered statistically significant. 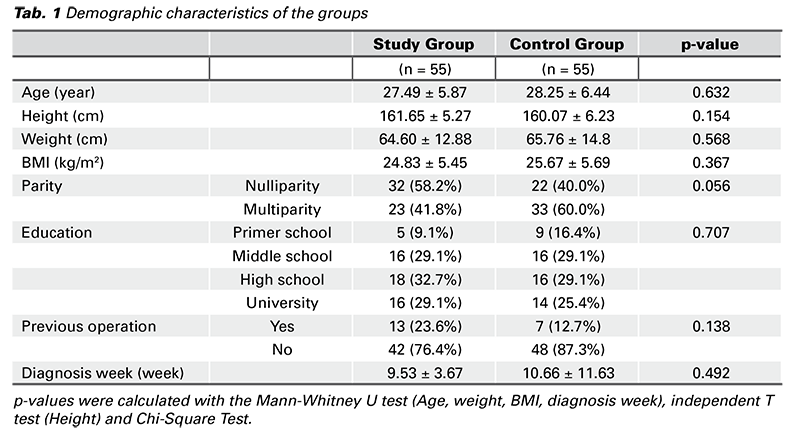 The threatened abortion group was divided in two according to the presence of hemorrhage area in ultrasonography and these were compared in terms of serum procalcitonin levels, NLR and PLR. Serum procalcitonin levels, NLR and PLR values were higher in pregnant women with a diagnosis of threatened abortion with hemorrhage area on ultrasonography than those without bleeding area, but there was no significant difference between the groups (p > 0.05) (Tab. 4).