Breast augmentation belongs to one of the most desired aesthetic surgeries worldwide. Even though silicone implants are used in the majority of breast enlargements, there are still patients treated with injectable fillers. Despite of a less invasive procedure, injectable materials often lead to serious complications. We present a case of a late inflammatory complication 20 years after an injection of unknown filler material. Regardless of early antibiotics treatment, the initial unilateral mastitis spread to the contralateral breast and both supraclavicular and axillar regions leading to a surgical revision and evacuation of the entirely consumed mammary glands. It is a surprising observation of a fast-expanding mastitis two decades after filler application.

According to The International Society of Aesthetic Plastic Surgery (ISAPS), augmentation of the breast still belongs to one of the 5 most desirable aesthetic surgeries. This is still accurate despite the fact, that in the last 5 years there has been a decrease in these operations by 20.6%. This decrease in interest in breast augmentation is attributed to the issue of Breast implant-associated anaplastic large cell lymphoma (BIA-ALCL), occurring in the surrounding of the silicone implants and has been much discussed recently (1).

The first attempt of breast augmentation is attributed to the German Bohemian surgeon Vincenz Czerny, who enlarged the breast by a lipoma withdrawn from the lumbar region in 1895 (2). In the early 20th century, the method applied for breast enlargement was the patient’s own adipose tissue. At the same time, synthetic materials such as paraffin injections began to be used. Like the next synthetic material- silicone injections, that was subsequently applied in the early 1950’s, also paraffin often caused granulomas, inflammatory complications and mammary deformities. Over the next few years, other foreign materials were tested, such as glass balls, polyvinyl sponge or polyurethane, without good long-term aesthetic outcomes (3). Cronin and Gerow started the period of silicone implants with their first breast augmentation with a silicone prosthetic in 1962. Since then, research and innovation of these silicone implants have been ongoing, dealing with, for example, the contents of the implant, its shape, and the texture of the surface (2,4). Nowadays, the use of a silicone implant presents one of the most common approaches for breast augmentation.

One of the first substances used to increase breast size was paraffin. The aesthetic results seemed acceptable initially, but complications often appeared, even if up to 5 to 10 years after application. Complications have been often serious, such as ulceration, fistulae, necrosis, or even fatal embolization (5). Another material widely applied was liquid silicone, the complications appeared similar to paraffin after several years. However, aesthetic consequences have often been worse, especially since additives were added to prevent silicone migration. Due to frequent inflammatory response, the additives were halted quickly (5,6). The above-mentioned complications have been reported with similar injectable materials.

We present a case of a 52-years-old patient, who was examined at the Emergency department for worsening pain in her left breast. As a professional bus driver, she reports excessive physical upper limbs activity and blowing cold air from the window to her chest the day before the onset of symptoms. She was prescribed Amoxicillin therapy by the general practitioner for incipient breast inflammation. Intensifying pain and fever over 39 degrees Celsius forces the patient to consult her condition the same day in the evening hours in the hospital and was referred for gynecologic assessment.
The examination showed an enlarged left breast, the lower external quadrant being swollen, reddened and painful by palpation (Fig. 1). Pathological re- sistance was not detected in the concerned breast nor in the left armpit. The right breast and axilla were without any pathological findings. The laboratory results showed elevation of white blood count (21x109/L) and C-reactive protein (114 g/L). The ultrasound showed phlegmonous affection without localized abscess collection. During the examination the patient mentions the history of previous breast augmentation 20 years ago. Because no typical signs of breast implants were seen on the ultrasound, she further elaborates that she underwent the enlargement abroad by application of gel injection. She could not provide more information and was without any complication up till now.

She was admitted for intravenous antibiotic (Amoxicillin/ clavulanate) and symptomatic analgetic and antipyretic treatment. The 4. day intravenous Metronidazol was added as a response for persisting elevation of WBC (17x109/L) and CRP (182 g/L) and initial affection of the right breast as well. Laboratory results the 6. day revealed range of WBC (8.4x109/L) and partial decrease of CRP (109 g/L). The ultrasound displayed a large collection of thickened, medium echogenic fluid including heterogenic structures with small hypoechogenic focuses resembling foreign material. Moreover, bilateral supraclavicular and axillar spreading has been visualized (Fig. 2). Surgical revision under general anaesthesia was indicated on the 7. day of admission. Bilateral semi-circular incisions were made in the lower outer quadrants with evacuation of approximately 350 ml putrid dense yellowish creamy fluid from each breast, which was sent for bacteriological cultivation (Fig. 3). After toilette and disinfection, the muscle fascia was found to be intact. The mammary glands were devastated completely by the inflammatory process (Fig. 3). The developed pockets were drained from both sides to enable rinsing of the wound. 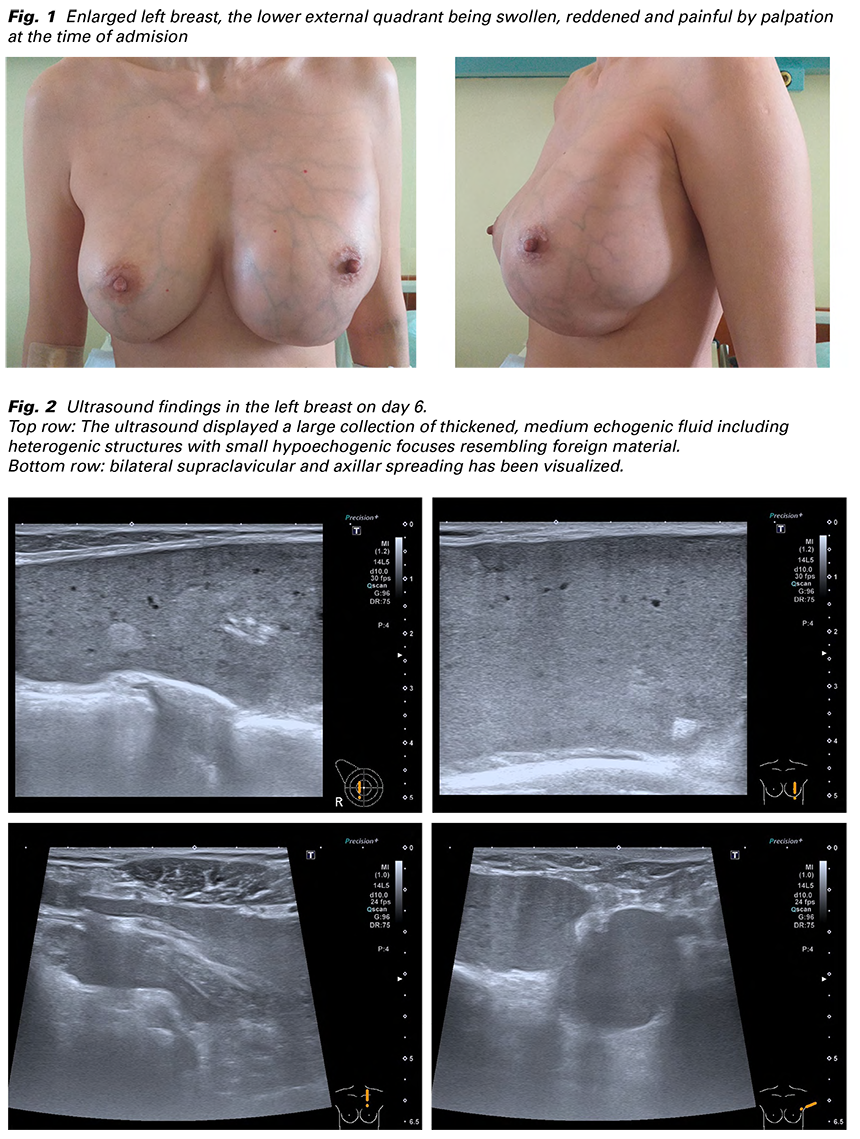 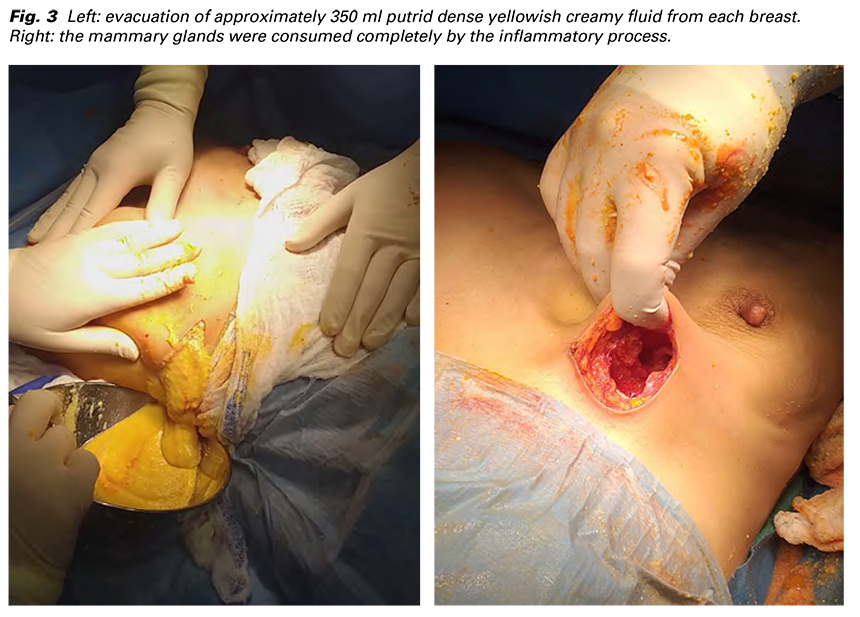 There was a decrease of WBC (6.8x109/L) and CRP (34 g/L) on the first postoperative day. The drains were flushed through two times a day with normal saline solution, the breasts were wrapped tight and antibiotics treatment continued. The 5. postoperative day the drains were removed and all the laboratory results reached normal levels. The 6. postoperative day the patient was dismissed home without further complications. On the check up the 10. day after surgery the breasts showed no signs of inflammation of other pathology and the sutures were removed. No complications occurred up to 4 weeks after the surgery, which was her last visit in our clinic and was referred for further follow up at her gynecologist. As the result of the consumption of the mammary gland by the inflammation, the breasts consisted only by its skin cover (Fig. 4). Consecutive breast reconstruction was recommended to undergo with a plastic surgeon.

The diagnostics and therapy management had been burdensome, because of limited information from the patient about her breast augmentation and no experience of injectable materials by our team. After reviewing the literature, the filling product that was probably injected into our patient’s breast was polyacrylamide hydrogel, which had been extensively used for breast augmentation in Ukraine and China since 1997. Polyacrylamide hydrogel, a polymer, that is formed by the synthesis of 2.5% acrylamide and 97.5% water also causes a large number of complications such as migration of the material, deformation, pain, and even malignant tumors have been reported (5). Qian and collective present data of 325 patients after breast augmentation by polyacrylamide hydrogel and show us the most prevalent complications. Most often, patients felt apprehensive about foreign material, an interesting fact from our point of view is that infection occurred only in 8.92% (7). Unfortunately, the patient presented in this case developed this complication. It is worth to mention, that the laboratory results were negative for aerobic and anaerobic cultivation, showing the injected material to be responsible causing a sterile inflammation. In addition, these complications are reported to arise earlier after surgery, which in this case was unexpectedly after two decades, probably in relationship with excessive physical activity and cold.

The aim of our article is to present a patient with a sterile inflammatory complication after breast augmentation with unknown injectable material, which initially appeared only in one of the breasts. The inflammation despite of antibiotics treatment gradually affected the contralateral breast with bilateral supraclavicular and axillar spread, leading to a surgical revision with evacuation of the entirely consumed mammary glands. The used filler material was presumably polyacrylamide hydrogel, in this case with a complication unusually appearing 20 years after it’s application.