Objective: This study compares pregnancy outcomes from a center in a high income country and another in a middle income country over a period of one calendar year. The goal of this study is to find possible methods by which to improve outcomes by comparing methodologies and statistics from two birth centers in very different demographics.

Design: Cross sectional study, original article
Setting: Havlíčkův Brod Hospital and Letsholathebe II Memorial Hospital
Materials and methods: This cross sectional study compared and contrasted pregnancy outcomes in the two aforementioned institutions by first obtaining statistics from their birth registers. This objective data was then combined with observations made by the author during his time working at both centers. Literature review was used to interpret and discuss obtained results.
Results: Letsholathebe II Memorial Hospital had a significantly higher number of live births and stillbirths than Havlíčkův Brod Hospital. It also had a higher rate of preeclampsia as well as babies born before arrival to the hospital. Havlíčkův Brod Hospital had a higher rate of postpartum hemorrhage, diagnosed anemia and retained placenta as complications of delivery. Caesarean section rate, maternal deaths and early neonatal deaths in both hospitals were comparable.
Conclusion: While each center had its own shortcomings, the most important markers of maternal deaths and early neonatal deaths were similar and acceptable. This was true despite the differences in the two centers in terms of demography, geography, economics and other factors.
Key words: high income country, middle income country, pregnancy outcome, stillbirth

Pregnancy outcome is an important tool in assessment of a health care system as a whole and the quality of maternal health care. While most developed countries have optimized maternal health care with positive pregnancy outcomes, this is still an unattained goal for most developing middle and lower income countries. This discrepancy in health care is primarily due to limited resources and lack of skilled personnel. This study compares data from Havlíčkův Brod Hospital (HBH) located in Havlíčkův Brod, Czech Republic, a high income country (HIC) in Europe and Letsholathebe II Memorial Hospital (LIIMH) located in Maun, Botswana which is a middle income country (MIC) in Africa.

HBH is in Havlíčkův Brod district which has an estimated population of 94,732. However, this is an underestimate of the hospital’s maternal patient population since women from other districts often choose to travel to Havlíčkův Brod for their deliveries. It is unofficially classified as one of the best in its region due primarily to issues related to patient perception and satisfaction such as beautiful interior, good atmosphere etc. Maternal health care is structured such that pregnant women are under the care of their gynecologists until term, at which point they transition to hospital doctors. It is at the hospital that further consultation about progression of pregnancy and delivery planning happens. The delivery is attended by a junior doctor and midwives with the specialist in the department available for consultation if needed. Uncomplicated vaginal delivery is generally conducted by the junior doctor and assisted by the midwife in the presence of a pediatric team (nurse and doctor) who take over care of the newborn. In the event of complications, the specialist is called to assist. Caesarean sections must be ordered by a specialist obstetrician and are performed by at least 2 doctors, one of whom must be a certified specialist obstetrician. During the period reported in this study, the obstetrics and gynecology department had 9 specialists and 7 doctors undergoing training.

By contrast, LIIMH is part of the Ngamiland District Health Management Team serving an estimated population of 74,792. Maternal health care is structured such that most women have antenatal care conducted by professional midwives. In case of complications, the midwife can consult a general practitioner or a specialist obstetrician. Antenatal care is conducted at outpatient clinics. In Maun, there is a clinic with a maternity facility where women who are likely to have uncomplicated delivery are allowed to give birth. Uncomplicated deliveries at both the clinic and the hospital are conducted by a midwife assisted by a second midwife. In the event of complications, the midwife calls a general practitioner. Caesarean section is ordered by the general practitioner and conducted by mostly him/ her assisted by a scrub nurse. It is worth noting that the midwives in LIIMH generally have a higher level of autonomy than their counterparts in HBH. They have the liberty to independently initiate interventions during labor such as rupture of membranes, performing episiotomy, ordering oxytocin infusion and routine suture of uncomplicated birth wounds. During the study interval, the center had 1 specialist obstetrician and 9 general practitioners who rotated between the hospital departments. The obstetrician, by virtue of being the only one in the district, was not routinely called to deliveries but only involved when the general practitioner required consultation.

In this cross sectional study, statistics from birth registers for the year 2017 in HBH and LIIMH were analyzed and compared. Furthermore, the author used personal experience from working at both hospitals to formulate a discussion of results backed up by literature review. 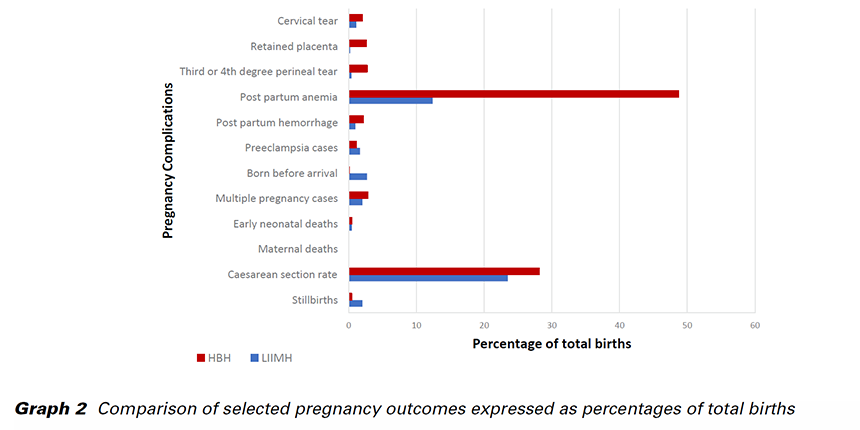 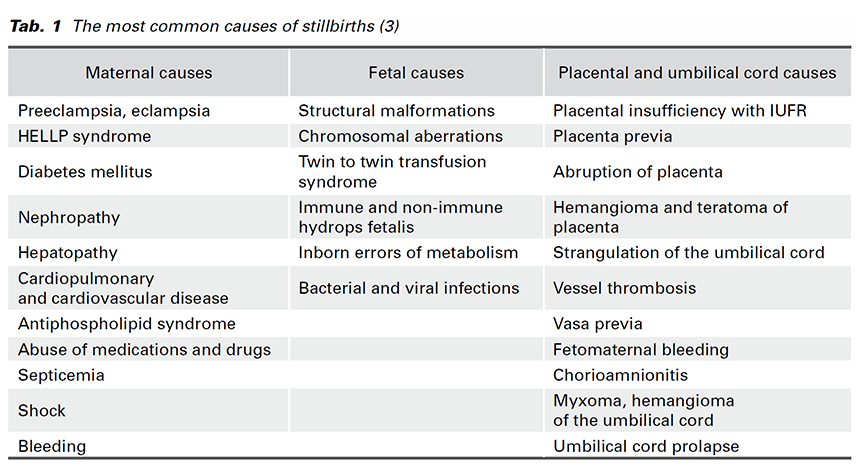 The majority of stillbirths are due to unknown causes in both HIC and MIC and are estimated at 32.1% and 43.7% respectively (3,5). Placental and umbilical cord conditions form the next largest subset estimated at 9.3% and 13.7% for HIC and MIC respectively, followed by antepartum hemorrhage at 14.4% and 9.1% for HIC and MIC respectively (5). It is well documented in literature that fetal monitoring during delivery and appropriate timely intervention during suspicion for fetal hypoxia reduces fetal mortality and neonatal morbidity. Almost a quarter of deliveries in both centers were performed by Caesarean section and, though the reasons for C-section were not reported in the data, the author has observed that the most common reasons are typically impending fetal hypoxia and non-progression of labor. This tendency to resort to C-section when complications arise might explain relatively low early neonatal deaths in both centers. Evidence from literature suggests that use of cardiotocograph and ultrasound screening with Doppler flowmetry studies as surveillance tools have resulted in reductions in antenatal stillbirth rates (4). The author, however, observed that very few women in LIIMH had the opportunity to be screened with these tools as compared to HBH where these monitoring devices were generously used. This might explain the significantly higher stillbirth rates in LIIMH when compared to HBH. Bhutta et al. provide evidence that properly trained and skilled health care workers other than obstetricians, such as professional midwives, can also effectively manage low risk pregnancies with reduced intrapartum complications and improved perinatal outcomes, including reduced stillbirth rates (1). This further supports the suggestion that the majority of the stillbirths at LIIMH are likely antenatal rather than intrapartal. This evidence might further explain why the two centers recorded similar maternal mortality rates and similar early neonatal death rates despite great discrepancies in ratio of obstetrician to inhabitants which was 1:74,792 in LIIMH and 1:10,526 in HBH.

According to Haws et al. the use of partogram and early intervention of slowed progression of labor showed reduction in Caesarean section rates (4). This might at least in part explain the slightly lower Caesarean section rate in LIIMH where use of the WHO recommended partogram is more routine than in HBH where partogram use is not part of typical birth protocol.

Postpartum hemorrhage (PPH) was significantly higher in HBH than in LIIMH. Reasons for PPH were not well documented. In both centers, the use of oxytocin to augment the third stage of labor was encouraged. However, at HBH it was not infrequent to have a woman who refused oxytocin treatment because she wished to have a natural delivery without any medications. In contrast, oxytocin was well accepted at LIIMH. This may be a possible reason for the lower PPH rate at LIIMH when compared to HBH. Diagnosed anemia rate was also higher in HBH than in LIIMH which may be also be due to PPH. At HBH, it is customary to perform a complete blood count before discharge even in asymptomatic patients as compared to LIIMH where this was done only during suspicion of anemia. This would lead to detection of more cases of anemia, explaining the higher rate. Retained placenta rates were also significantly higher at HBH as compared to LIIMH, likely due to the same discussion of oxytocin as mentioned above.

The higher rate of babies born before arrival to the health facility in LIIMH in comparison to HBH was due to distance travelled to reach the facility. The patient population of LIIMH is spread across a vast area with sparsely located settlements.

Findings from this study have revealed that, despite the numerous differences between the two centers, they both had similar rates of maternal deaths and early neonatal deaths. These pregnancy outcomes are of the utmost importance and reflect quality of pregnancy care. Further research may be directed toward specific complications for each system with the aim of further improving the quality of care for pregnant women. These areas include stillbirth rate and preeclampsia for LIIMH, and postpartum hemorrhage and anemia for HBH.

A strong point of this study is that it examines basic statistics that reflect the quality of pregnancy and delivery care, therefore it would be easy to replicate in almost any system. It is, however, limited in that it does not have more detailed information concerning diagnoses for some of the results, such as causes of stillbirths and PPH. This, however, also creates an opportunity for further research.