Background: Abdominal hysterectomy is one of the most frequently performed surgical procedures in gynecology.  The new coated polyglactin 910 sutures with the antibacterial agent triclosan may help to reduce the frequency of infectious postoperative complications and consequently shorten the duration of hospital stay.

Materials and methods: The study was carried out with 450 patients who underwent abdominal hysterectomy between August 2008 and August 2018. The following factors were taken into account: C-reactive protein, the application of post-operative antibiotics, the maximum body temperature, the duration and the cost of hospitalization.
Results: In those cases where triclosan-coated suture was used, the phlogistic C-reactive marker was significantly lower (p < 0.002) than in the group where conventional suture without triclosan was used, the maximum body temperature during the whole period of hospitalization was also significantly lower (p = 0.004), the application of post-operative antibiotics was significantly lower (p < 0.001), the length of hospital stay was significantly shorter (p < 0.001), and the costs, calculated in treatment days, were also significantly lower (p < 0.001).
Conclusions: It can be concluded that the application of the sutural material with triclosan offers real benefits in the prevention of infectious complications. Particularly, the vaginal wound is the region with the highest colonization of pathogens. Therefore, for the suture of the vaginal wound in particular, we especially recommend applying triclosan-coated polyglactin 910 suture in order to eliminate the risk of local infection resulting directly from the use of the sutural material.
Key words: triclosan, hysterectomy, infectious complications, polyglactin 910

Abdominal hysterectomy is the most frequent gynecological procedure, and, after caesarean section, the second most frequent major surgery overall. We know from past experience that it is improvement in surgical technique, asepsis, antisepsis, meticulous preoperative preparation and the application of modern operative instruments and materials that have shortened the duration of hospital stay from weeks to days. The first record of abdominal hysterectomy dates back to the year 1825, when Langenbeck surgically removed the uterus of a patient for the treatment of advanced cervical cancer, and the patient died a few hours after the 7-minute operation (1,2).
The success of the procedure depends on bleeding, infection and pain control. The significance of infection control was first recognized by Ignaz Semmelweiss in his study of puerperal fever. His unrecognized and underestimated work was later supported by Joseph Lister and causally proved by the discoveries of Louis Pasteur and Robert Koch. Following the introduction of routine antibiotic prophylaxis in abdominal hysterectomy, infectious morbidity dropped considerably. Nevertheless, infectious complications in the wound after abdominal hysterectomy still remain the principle cause of postoperative morbidity (3).
Sources of infection include the carrier state of Streptococcus epidermidis, Staphylococcus aureus, Escherichia coli, Enterococcus faecalis, but sources of exogenous infection such as drains, catheters or wires monitoring the vital functions are also responsible (4,5). In abdominal hysterectomy, the vagina is the region with the heaviest concentration of pathogens. The most recent algorithms of the Center for Disease Control (CDC) recommend a sterile cover for the surgical wound for the first 24 hours after surgery. At this time a fibrinous film seals the wound and thereby prevents the invasion of bacteria (6,7). This is possible only in the case of a laparotomic wound, not in the case of a vaginal wound.
Triclosan (5-chloro-2 (2,4-dichlorophenoxyphenol, C12H7Cl3O2)) is a broad-spectrum biocide that has been used in various products for everyday use, such as cosmetics, for over 30 years. According to contemporary studies, the mechanism of action is based on the inhibition of the enzyme enoyl-ACP reductase (Fab I gene) through which the biosynthesis of bacterial fatty acids is blocked (8,9,10).
This prospective study focuses on the acquisition of knowledge regarding the incidence of selected postoperative complications and the duration of hospital stay as well as the costs of hospitalization after abdominal hysterectomy in cases where conventional coated polyglactin 910 sutures were used and in cases where antibacterial triclosancoated polyglactin 910 sutures were used.

The research study was carried out among 450 patients between August 2008 and August 2018. Written informed consent was obtained from all patients at the time of operation. In the first group there were 225 patients who underwent wound closure with antibacterial triclosan-coated sutures during abdominal hysterectomy.
The comparative/control group consisted of 225 patients who had a conventional wound closure. They were assigned randomly double- blind to the two groups. In both groups the following factors were taken into account: age, body mass index, diabetes mellitus, a phlogistic marker of C-reactive protein (CRP) on postoperative day two (48 hours after surgery), the maximum body temperature of patients after abdominal hysterectomy during the whole period of hospitalization, the application of post-operative antibiotics, the length of hospital stay, and the cost of hospitalization. The preoperative characteristics of the patients are given in Tab. 1.

Extrafascial abdominal hysterectomy was performed after standard preoperative preparation and according to standard operative protocols. Laparotomy was performed according to Pfannenstiel. During preoperative preparation a routine antibiotic prophylaxis consisting of two grams of cefazoline was administered to each patient intravenously 30 minutes prior to skin incision. Triclosan-coated suture was employed on the patients in the first group for uterus skeletization, and both vaginal and fascial closures. In both groups the skin and subcutaneous tissue were closed using the conventional sutures.

The body temperature of all patients was measured and monitored daily and a CRP was examined on the second day after surgery.

The Wizard software, version 1.9, was used in the analysis of results. During statistical analysis the following analytical methods were applied: descriptive and frequency analyses, the Paired t test and Fisher’s exact test. All values are presented as mean values with standard deviations. A value of p < 0.05 was considered statistically significant.

The average cost of conventional suture was € 20.22 per patient, whereas in the group where triclosancoated sutures were used instead, the cost was € 22.76. In the group of patients where the sutures with triclosan were used, the cost increased by € 2.54 (Tab. 2). 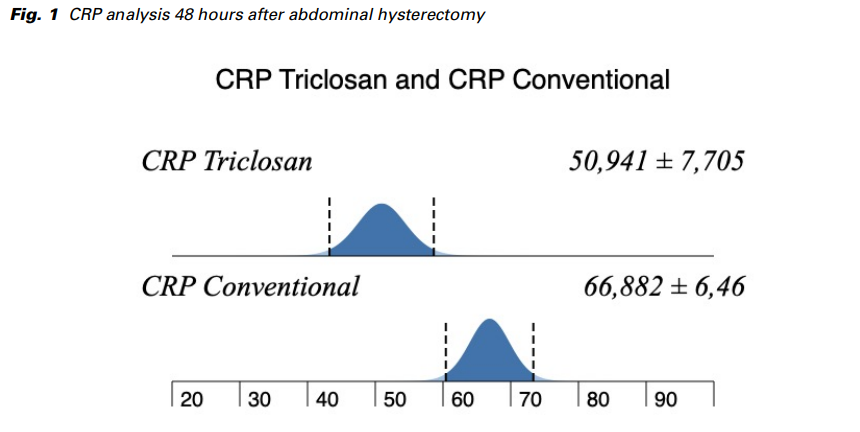 By comparing two groups of abdominal hysterectomy patients, the first of which were treated using antibacterial triclosan-coated polyglactin 910 sutures and the second using conventional coated polyglactin 910 sutures, it has been discovered that infectious complications manifesting themselves clinically in immunocompetent patients as an increase in body temperature and an increase in the phlogistic marker CRP were much more serious in the group where conventional suture was used. A C–reactive protein (CRP) is a highly sensitive marker indicating inflammation. Its plasmatic levels rise with all kinds of inflammation regardless of its etiology. These findings correspond to previous studies (11,12).
Several studies have investigated the influence of various risk factors on the development of infectious postoperative complications (13). In our study, the selected risk factors, such as age, body mass index and diabetes mellitus, were evenly distributed in both groups and should not therefore have had any considerable influence on the results of the statistical analysis.
The cost of the suture containing triclosan for one abdominal hysterectomy is € 2.54 higher than the conventional suture. Despite this, however, the cost of the overall length of hospitalization in the group where a conventional wound closure was used was on average € 130 higher. This is a comparison of the cost of hospitalization (according to the number of treatment days). What is more, the treatment of infectious complications is relatively costly if all costs associated with the administration of anti-infectious drugs; local disinfectants and the surgical treatment of wounds are taken into account.
Wound infection most commonly appears in the area of incision. As early as 1957, Elek and Conen observed that even a low concentration of bacteria in the vicinity of the suture is sufficient for the development of a wound infection (14). Therefore, it is logical to apply sutures coated with an antibacterial substance directly to this locus minoris resistentiae. Inflammatory processes in the area of the surgical wound eventually lead to adhesions in the lesser pelvis, and also on many occasions to a reduction in the effectiveness of vaginopexy.
The antibacterial agent triclosan is a broad-spectrum biocide, and its action is antiseptic not antibiotic, so the likelihood of resistance development should be very low. The optimum situation would be if more kinds of suture coated with various antiseptic substances were available, so that the sutures used in surgical procedures could be varied periodically and the probability of resistance development would be minimized.
Our study results lead us to conclude that the application of antibacterial triclosan-coated suture is invaluable for avoiding infectious complications in cases of abdominal hysterectomy. It is the vaginal wound that is the region with the highest colonization of pathogens, and we would therefore recommend the use of antibacterial triclosan-coated polyglactin 910 sutures especially for the suture of the vaginal wound. It directly eliminates the risk of local infection and also protects the surgical wound from contamination during the first few days after surgery.

Written with the support of the Ministry of Health of the Czech Republic – RVO VFN64165.