From a mathematical standpoint, human representation is rather ineffective. Research has shown that considering all possible pathological factors which affect the human embryo/fetus from fertilization until birth, only 30 % of all fertilized eggs will achieve a live birth (1). Recurrent spontaneous abortions (defined as at least three consecutive pregnancy losses experience by a female with the same partner) affect approximately 1–2 % of females of v reproductive age (2). In general, early pregnancy losses occurring during the first trimester are due to a number of causes; whereas, the nongenetic causes include, for instance, endocrine or immunological abnormalities, congenital or acquired hypercoagulation disorders, or congenital vaginal anomalies (3).
The most common genetic causes of early pregnancy losses are chromosomal aberrations, primarily numerical aberrations. Chromosomal aberrations may cause about up to a half of early pregnancy losses. Various studies which worked with a different number/types of aborted fetal tissue samples detected chromosomal abnormalities in 20 – 70 % cases (4,5,6,7).
The basic type of cytogenetic examination is routine karyotyping of cells obtained from an aborted fetal tissue sample; i.e. examination of chromosomes in the meta - phase using staining with a suitable dye, so-called G-banding, in the optical microscope (4). This examination can detect all numerical deviations of chromosomes, including chromosomal mosaicism, balanced chromosomal rearrangements as well as more extensive chromosomal deletions and duplications. However, it is the detection of small deletions and duplications that makes standard karyotype less efficient due to its low resolution. This is why microarray-type analysis of lost fetal tissue has been on the increase (the most commonly followed methodology is based on comparative genomic hybridization, or array-CGH) (8,9).

This paper presents a retrospective analysis of the karyotyping of aborted fetal tissues which were examined in the Cytogenetic Laboratory of The Institute of Biology and Medical Genetics at The First Faculty of Medicine, Charles University and at The General University Hospital, Prague (ÚBLG 1. LF UK and VFN, Prague) in the years 2009-2014 (6 years). The samples to be analyzed were obtained from the internal database kept by the laboratory, came from the above-referenced period, and their karyotype test was required due to a missed or spontaneous spontaneous abortion. The following information was recorded with regard to every sample: the success or the lack of the success of the culture of the sample, karyotype results (in case of successful culture of the sample), the age of the mother, gestation week when an abortion occurred, and the sex of the fetus (determined according to its karyotype). The results obtained were statistically assessed by means of the R (10) software using a two sample t-test, two sample Wilcoxon test, and Fisher tests. If the P value was lower than 0.05, it was considered statistically significant. Cytogenetic examinations alone were performed in a standard way, following common methodologies used to examine karyotype from a tissue sample. G-banding was used for the visualization of chromosomes. Other examinations, such as QF-PCR or array-CGH, are not routinely used by our laboratory in this indication. Karyotype was evaluated using International System for Human Cytogenetic Nomenclature (ISCN) (11).

In the given period of time (2009-2014) the Cytogenetic Laboratory of ÚBLG 1. LF UK and VFN, Prague examined a total of 233 fetal tissue samples from lost pregnancies (missed or spontaneous abortions). Most samples were obtained from the Department of Gynecology and Obstetrics of 1. LF UK and VFN, Prague. Of all 233 examined samples 212 were cultured successfully (91 %); i.e. they provided karyotype results. The culture of the remaining 21 samples (9 %) was unsuccessful and their examination did not provide valid results. The main reason for the cytogenetic examination of the fetal tissue was the dia - gnosis of missed abortion (214 samples, or 91.9 %). The residual tissues of spontaneous abortions were examined less often (19 samples, or 8.15 %). Among the 212 successfully examined samples 52 (24.5 %) pathological chromosomal aberrations were detected, most frequently Down syndrome and Turner syndrome. These two diagnoses were observed in 7 samples. The complete survey of the other chromosomal aberrations is shown in Tab. 1. 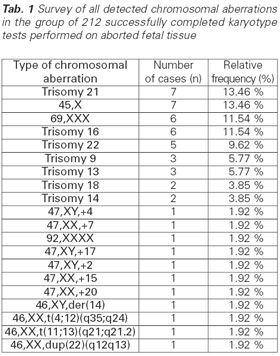 The average age of mothers was 34.06 years (± 5.03 SD). The largest number of examined samples comprised fetuses aborted by women aged 35 and over. This group also included the highest percentage of detected pathological karyotypes (29.9 %). The number of chromosomal aberrations detected in the group of women under 30 was a third smaller 20.0 %). Detailed data are presented in Tab. 2. The relationship between maternal age and the incidence of numerical aberration was assesses using as a two-sample t-test and proved to be statistically significant: p = 0.022 (95% CI for a difference of 0.28 to 3.50). Another variable under observation was the length of pregnancy at the time when an abortion occurred. According to relevant clinical reports, the average length of pregnancy at the time of abortion was 72.87 days (± 18.75 SD). However, there is a marked difference in the distribution of the incidence of pathological and normal findings with regard to the length of pregnancy at the time of abortion. The maximum number of the pathological findings occurs several days later than normal findings. This trend is depicted in Graph 1. Its statistical significance was tested using a two-sample Wilcoxon and a statistically significant relationship was proven (p = 0.0000041). 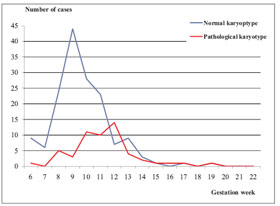 The issue of human reproduction and its defects is a complex one. The relationship between chromosomal aberrations in embryos and fetuses and early pregnancy losses has been known for a long time. Our sample collection also showed a significant occurrence of chromosomal abnormalities, specifically 24.5 %. Although this incidence is still within the limits presented in other studies, our detection rate is markedly lower compared to 50–60 % pathological findings which are commonly reported (5,6,12,13). The pathologies detected by us included a usual range of numerical chromosomal aberrations which were present in the tissue of aborted fetuses; particularly, a higher percentage of Turner syndrome, trisomy 16, trisomy 22 and several polyploidies (specifically, triploidies). The rarest autosomal trisomy; trisomy 1 and 19 (5) were not detected among our samples. Rather surprisingly, a high percentage of trisomy 21 was observed, which may be due to the fact that a large number of samples came from fetal tissues aborted after the 11th week of gestation when a larger occurrence of the three “typi- Tab. 1 Survey of all detected chromosomal aberrations in the group of 212 successfully completed karyotype tests performed on aborted fetal tissue 26 Actual Gyn 2019, 11, 23-26 www.actualgyn.com cal” autosomal trisomies (trisomy 13, 18, and 21) can be generally expected.
Our sample collection displayed a clearly skewed fetal sex ratio of the examined samples mainly in the subgroup with a normal karyotype where the F/M ratio was as high as 6.81. Although the prevalence of the female sex in this ratio is recognized in other studies (5) as well (for instance, a F/M ratio of 2:1), the ratio of 6.81 represents a statistically significant difference and can be attributed to the greater incidence of maternal contamination where only maternal cells were cultured from a tissue sample and those maternal cells falsely imitated a normal female karyotype. This undesirable phenomenon could be prevented by performing QF -PCR analysis and examination of a maternal profile provided that these procedures were indicated by a clinician. On the other hand, a very high percentage of cultured samples was achieved (nearly 92 %). However, this result had to be adjusted in a more detailed study which excluded contaminated samples. The general problem is the difficult availability of a suitable sample in case of spontaneous abortions.
Precision of conventional karyotyping could be extended with a microarray-type analysis which would enable to detect a higher percentage of abortions caused by chromosomal abnormalities which are impossible to detect during a routine examination of chromosomes in the light microscope (8,9). Generally, the performance of the microarray analysis can be recommended in case of habitual abortions and of the negative results of a standard cytogenetic examination. Yet microarray-type examinations should not completely replace the routine karyotyping of lost fetal tissues because the microarray analysis fails, for instance, to correctly identify translocation trisomies and identifies low-frequency mosaic only with difficulties. In addition, array-CGH often fails to identify triploidy (14). Our study proved the negative impact of advanced maternal age on the incidence of chromosomal aberrations as abnormalities were detected more often in older mothers (this trend was statistically significant). This is consistent with findings reported by other authors (e.g. 7). In addition, our study proved the statistically significant trend of correlation between an assumed gestation week and the presence / a lack of the presence of pathologies. A markedly smaller number of chromosomal aberrations were detected in abortions which occurred during earlier gestation weeks compared to those occurring in the later weeks.

Our study confirmed that chromosomal aberrations detectable in the optical microscope represent a significant cause of missed and spontaneous abortions. It also revealed that even aborted fetuses show the well-known correlation between a growing increase in chromosomal aberrations and advanced maternal age. The fetuses in which chromosomal aberrations were detected after abortion were somewhat older than aborted fetuses with a normal karyotype. Furthermore, the study showed that despite all efforts the karyotyping of a fetus from a tissue sample is, in some cases, limited by possible maternal tissue contamination which is very difficult to detect when karyotyping is the only examination. Therefore, it would be advisable to exclude this contamination by using QF-PCR. On the other hand, routine cytogenetic examinations is still rather underappreciated in this area as it not only gives parents information about why an abortion occurred, but it also may (translocation Down syndrome, other structural aberrations) prove beneficial for the further reproductive planning of the couple.

Written with the support of the Ministry of Health of the Czech Republic – RVO VFN64165.