Introduction: There are no sufficient therapy strategies for vulvodynia in women. Extracorporeal shock wave therapy (ESWT) is widely used for the treatment of musculoskeletal diseases, muscle spasticity, hypertonus, renal and biliary calculi, urological and recently andrological disorders. We examined the effect of ESWT on vulvodynia in women.
Methods: A prospective study was conducted between 2015 and 2018 years. The feasibility study involved thirty women with vulvodynia for at least 3 months. The patients received perineally applied ESWT treatment weekly (3 000 pulses each for 4 consecutive weeks). The device used was a standard electromagnetic shock wave unit with a focused shock wave handpiece. The access area was changed after every 500 pulses. Six areas covered the whole vulva and perineum. The grade of pain was evaluated with the visual analogue scale of 11 degrees (VAS, 0-10) before and after the treatment and Cotton Swab test (CST, Goetsch scale 0-4) at the same terms. Follow-ups were done after 1, 4, and 12 weeks having finished the last ESWT. Ethical committee agreement and written consents were provided.
Results: 29 women completed the study. In VAS and CST testing we proved significant differences between before and all the follow-ups (P < 0.001; P < 0.05) respectively. The reduction of pain in VAS was 53 %; CST 47 % in the last testing.
Conclusions: ESWT seems to reduce significantly the pain perception in our group of treated patients.  We are encouraged to explore this technique further. The method is easily repeatable, inexpensive, and free of any side effects.

Chronic pelvic pain syndrome (CPPS) in women is currently considered a frequent pain condition (1–6). Several subgroups of CPPS are recognised, vulvodynia being the most frequent one (7,8). A study of National Institutes of Health (NIH) states that 15.7% of women report pain of lower genital tract lasting for 3 or more months. Other studies cite prevalence of 9–12% (4,9–12). Vulvodynia is characterised as burning, stabbing or pain in absence of objective clinical or laboratory findings, which could explain the symptom (2,7,13). A therapeutic standard comprises treatment of neuropathic pain (14,15). Auxiliary treatment methods include pelvic rehabilitation, superficial electromyography, administration of interferon alpha, topical oestrogens, botulinum toxin A and/or surgical intervention most often based on denervation of the vulva (11,16-20). Also myofascial pain and pelvic hypertonicity are discussed as possible causal factors, as well as myofascial trigger points and the possibility of their blockade (2). Current treatment methods seem to be insufficient. Most authors describe only treatment of the proper pain. The majority of patients is treated for infection, although no infection was proven (21-23). Therefore, we strove to find a simple, safe, and modern method to solve this issue.
Extracorporeal Shock Wave Therapy (ESWT) appears as one of therapeutic possibilities. The use of electromagnetic, electrohydraulic or piezoelectric ESW changed therapeutic options in many fields of medicine. The application of ESWT in the treatment of urolithiasis and biliary lithiasis is frequent (24). Low intensity ESWT (Li-ESWT) is widely used in orthopaedics primarily in the treatment of degenerative conditions, arthropaties or plantar fasciitis (25-27). ESWT can also be utilised in the treatment of non-union of long bone fracture and non-healing defects, e.g. chronic diabetic and non-diabetic ulcers (28-30), muscle spasticity and hypertonus (31-33), and Pey ronie´s disease and erectile dysfunction. Recently, ESWT started to be used in the therapy of CPPS in males (34-36).
The aim of our feasibility study was the possibility to use ESWT in the treatment of vulvodynia. Obtaining a significant clinical pain perception decrease would have hold promise for further practical use.

The study was part of a prospective controlled study carried out in 2015-2018. The research protocol was approved by the Ethical Committee of Faculty Hospital Na Bulovce, Prague, Czech Republic. All patients signed an informed consent to participate in the study. Patients were recruited from centres 1 and 3 in the list of authors. Treatment principles, application, and evaluation were approved by the authors of the study. We report the results of feasibility study to set basic criteria for this method. 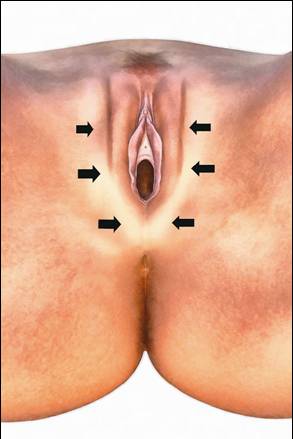 The evaluation of pain perception decrease was based on differences of the VAS and CST degree of pain rating before and after treatment. Follow-up examinations took place 1, 4 and 12 weeks after last application of ESWT. Further examinations, i.e. dopplerometry, oximetry etc., were performed which are outside of the scope of this paper. In concordance with established clinical practice, changes of 30% and higher were considered significant.

The data were tested for normality with skewness, kurtosis, Shapiro-Wilk, and Kolmogorov-Smirnov tests. In case of normal distribution we used ANOVA, in case the normality criteria were not met, non-parametric Wilcoxon signed-rank test for two related samples was used. We evaluated difference between the value before the study start and the respective follow-up. The level of significance (alpha error) was set at 5% (two-tailed test) for our analysis. The Bonferroni correction was applied with resulting adjusted p = 0.017.

Twenty-nine patients completed the study. One patient was excluded because of having had not participated in all follow-ups. The normal distribution criteria were not met. Therefore, non-parametric Wilcoxon signed-rank test for two related samples was used for the result before treatment and the respective follow-up results. Because of non-parametric distribution of data, medians were used as the main reference parameters. Median VAS value before treatment was 6.2, median CST value 3.3, after treatment was median VAS value 2.67 and median CST value 0.7. Further consecutive results are given in (Tab. 1). We observed statistically significant differences between reported pain before treatment and at all of the follow-ups (p-value < 0.001 and < 0.05 in VAS and CST, respectively). The reduction of pain was 53% in VAS and 47% in CST at last follow-up.

According to databases available this is the first study on use of ESWT for therapy of vulvodynia in women. ESWT induces the hyperstimulation of nociceptors and change in CNS patterns can play a significant role in treatment of CPPS and especially vulvodynia (36). Published studies discuss possible disruption of nerve pulses by ESWT (32,36). Autonomous nerve system and co-ordination between smooth and striated muscles can play significant role in changes of structures treated with ESWT (37,38). Clinical studies report stimulation of growth factors, propagation and formation of new blood vessels (angioneogenesis) (29). Moreover, ESWT can be used without any demonstrable side effects. These factors are stressed in many orthopedic and urologic studies (35), in this case the authors refer to the use of low intensity ESW, however. High tolerability of ESWT enables its use without anaesthesia and we see the limitation in use mainly in disorders accounted in exclusion criteria above. Although it is known that the effect of ESWT is intensity-dependent, we did not exceed the energy flux density of 0.25 mJ/mm 2 because of possible pain intolerance. 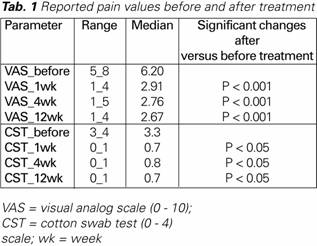 Extracorporeal Shock Wave Therapy seems to be an effective method for the treatment of vulvodynia in women. Our feasibility study proved a statistically significant pain reduction before and after treatment in our patients. Similarly to some CPPS studies in males, this technique offers a modern physical method capable ofdecreasing or even eliminating the use of analgesics and supportive therapy. ESWT is simply reproducible and economically effective (disregarding the initial investment in a quality apparatus). Further discussion regarding specifictypes of usage and a randomised double-blind study is needed.